and Collected in Net!

While each player has their role, they also have become closer as a group and push each other to be their very best.  "We all want to win so we push each other in practice to make each other better," said Pashovitz. Bosak says the three are very different goaltenders, not in style but just different in the way they play and approach the game.  With a senior in Levin, a sophomore in Pashovitz and a freshman in Daccord in the trio, Bosak says the Sun Devils future is bright, but the talent is also theirs to win now. "Rob, our senior, is a very patient goaltender who controls the game, he is more of what people call a hybrid," said Bosak.  "Where Ryland and Joey are more traditional style goaltenders, both are very good with the butterfly technique."

Levin, entered this season fully prepared after starting last season coming off a knee injury and coach Powers says that hard work in the summer did not go unnoticed.   "This year was different because I actually got to prepare for the season instead of rehabbing," said Levin.  As the senior of the trio, Levin says he doesn't feel any extra pressure, but rather is just interested in doing what he can to help the team win.  Pressure, I believe, is a word that does not exist in Levin's vocabulary, he is truly the calmest member of the trio.

Pashovitz, the collected goaltender of the bunch continues to get better each day, according to Powers.  While Pashovitz has yet to see the ice in any of the Sun Devils four games, Powers said he is confident when called upon he will be ready.  "Since I didn't make the trip to South Bend, I just stayed back to work on some things," said Pashovitz.  "I know I just have to keep working and getting better and be ready when I get my opportunity."

Daccord came to ASU with loads of confidence having been drafted by the Ottawa Senators and the son of a former professional goaltender.  That confidence shows not only in practice, but in the games as well.  Daccord believes he can and will stop everything thrown his way, and if he doesn't, responds with demeanor of a resilient professional.  "I just try to focus on stopping every shot, making sure I see and track every shot, because that is all I can really control out there," said Daccord.  "Yeah, you know you can't control if someone takes a penalty or makes a turnover, my job is just to stop the puck."

"I have a lot of confidence in all of our goaltenders and really like what we have at that position," said Powers.  "I like the way they all compete in practice and I think the guys feel really good with whoever is out there."  Having solid goaltending is something Powers knows is the key to playing winning hockey and everything starts from the net out for the Sun Devils.

In addition to the competitiveness within the players themselves, Bosak believes the incredibly strong schedule the Sun Devils are playing this season will also help keep the goalies sharp and make them better.  "Oh 100 percent (the tough schedule makes the goaltenders better) it's kind of like a microcosm of life, the only time you find out something about yourself is when you are challenged," added Bosak.  "When you get comfortable at a level you start taking things for granted so playing really good competition only makes you better.

So as the season continues, Bosak says their is really no limit as to what the Sun Devils can achieve and he is certain his trio of netminders will play a big part in that success. 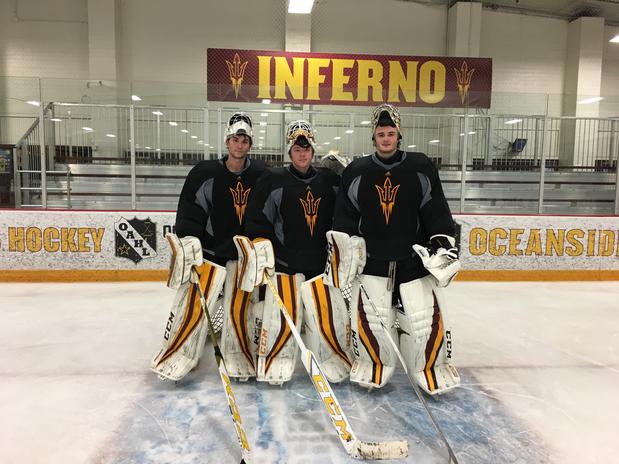 The success of a hockey team begins in net, and that has never been more evident at Arizona State University this season.  The Sun Devils boast a trio of netminders that are the backbone of the squad; they are Joey Daccord (confident) Robert Levin (calm) and Ryland Pashovitz (collected).  For coach Greg Powers, a former goaltender himself, the three provide a confidence that goes along way in establishing a winning hockey program.

"All three have been really good for us this season,"  said Powers.  "Joey has stepped up lately, but Rob had a big game for us at Notre Dame and Pash (Pashovitz)  has been steady, just working and pushing the others for playing time."  While Daccord is the big name and National Hockey League draft pick of the Ottawa Senators, Levin and Pashovitz are the two incumbent goalies, that paved the path last season.  As the Sun Devils go, so does the trio who are the last line of defense.

Daccord has taken over the number one position after four games, but Powers says Levin is playing very well too, and Pashovitz has been working extra hard with goalie coach George Bosak.