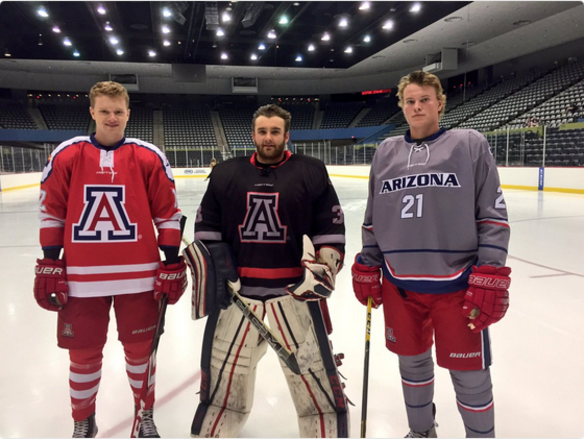 home, away, and third jerseys

Cat Claws... A Visit With The Hogan Twins!

Upon arrival in Tucson four years ago, the idea was attend school and earn degrees, playing hockey was not something the Hogan's considered even though they had been playing hockey since age five and if not for the arrival of head coach Chad Berman after their freshman year they may not ever stepped on the ice  John began the process all so subtly working has coach Berman's stat man for the first semester of his sophomore year, while Toppie enjoyed college life and his free time.  Fast forward to the end of fall semester when John approached Berman inquiring to the possibilities of joining the team after break.

To say the University of Arizona is in their blood would be a huge understatement for twin brothers John and Toppie Hogan.  The two forwards from St. Louis, MO were destined to attend college in Tucson since the day they were born, having parents who were alums and a sister who preceded them to the Old Pueblo.  The difference was these two were hockey players and wearing the "A" on their jersey was not something that happened immediately.

University of Arizona Hockey plays near campus in the Tucson Arena. Here is a short sample created by filmmaker Timothy Gassen -- from the last two home games of the 2016-17 season -- of the electric game atmosphere, unequaled in college hockey.

​Timothy Gassen speaks to Arizona Hockey players and coaches about their spot in the 2018 ACHA National Tournament.

Referee Zach Reese talks about the UA vs ASU rivalry

Highlights from U of A  vs  NHL